Ten activists including Aruna Roy, Arundhati Roy, Bezwada Wilson and Indu Prakash Singh, came out strongly in support of Prashant Bhushan after the Supreme Court on February 6 issued notice to the senior advocate. Notice was issued in the petitions filed by the Attorney General and Central Government seeking to initiate criminal contempt against Bhushan.

The petitioners said that they were ready to face the same consequences as Bhushan, who on February 1 had tweeted about the irregularity in the appointment  of the CBI Director. Bhushan’s tweet said : 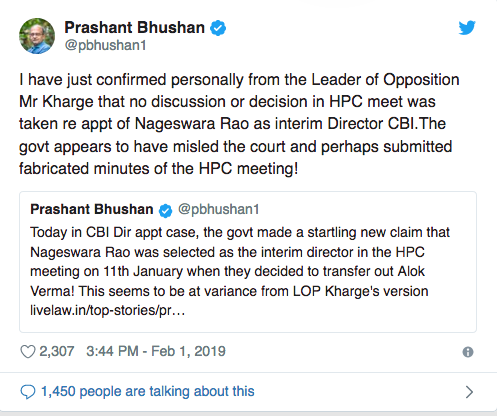 Attorney General (AG) K K Venugopal filed a petition seeking to initiate contempt proceedings against Bhushan for his tweet. The union government also moved a petition saying the senior counsel’s allegations made from a public platform called for the highest punishment.

On February 6, a bench of Justices Arun Mishra and Naveen Sinha issued notice to Prashant Bhushan. But the latter filed a petition to recall the notice and questioned the jurisdiction of the bench in even entertaining the petition by the AG and the Union government, stating that, by the present roster arrangement, the listing of cases was the sole prerogative of the Chief Justice of India.

In their petition, senior journalists N Ram, Arun Shourie, Mrinal Pande, Paranjoy Guha Thakurta and Manoj Mitta have also filed an intervention application stating that making fair comments on sub judice proceedings will not amount to criminal contempt. The outcome of this case will be closely watched for its implications for free speech.

Read the petition by the civil society activists seeking to implead themselves: Impleadment application of civil society representatives