This is the 50th day of the unprecedented and untenable communications blockade in Kashmir. There’s no sign that this government will be lifting it, despite the near universal condemnation from journalists’ bodies and international organisations. The latest is a Statement from the Kashmir Press Club:

The club’s management body during a meeting while discussing the impact of the mobile telephony and internet blackout said that it has severely hampered work of journalists and media. Journalists are handicapped and unable to get confirmation about ground situation due to this communication blockade. The restrictions are totally unwarranted and unreasonable aimed at gagging the Kashmir p 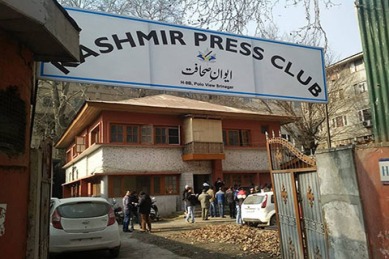 There have been several reminders from the club to the government for freeing communication of newspaper offices, journalists and the club itself. But an inordinate delay in restoring the communication confirms the misgiving that the government doesn’t intend to provide an enabling atmosphere for the media to operate in the Valley.

The Kashmir Press Club had also submitted a list containing the mobile phone numbers of the accredited journalists, editors and the registered members of the KPC to the concerned authorities on September 19, but unfortunately no action appears to have been taken over it so far.

KPC reiterates its demand for the government to immediately lift ban on mobile and internet which will enable the media to function without any hassle in the valley.