Last week, environmental groups were taken by surprise at the block on environmental websites and a notice by Delhi police against multiple emails sent to Environmental minister Prakash Jawadekar. The block has now been lifted but the notice remains.

Radhika Jhaveri explains why Internet censorship has become a tool against campaigns by active against the EIA (Environment Impact Notification) 2020.

On 29th June, 2020, the “Let India Breathe”( an environment-campaign website ) team found out that their website had been shut down. After several technical tests carried out by their developers, the team realized that the problem wasn’t at their end. 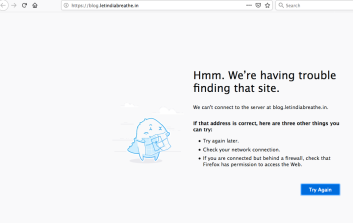 The team then reached out to the site’s domain-provider – GoDaddy-  to figure out what had gone wrong. On 3rd July, 2020, the domain-provider informed them that the website had been blocked on orders of the National Internet Exchange of India (NIXI). No notice  had been served on the website,  no order was given, and no explanation provided. The site had simply been taken down.

Upon realizing that a government authority had taken down their site, the team approached the Internet Freedom Foundation ( IFF ) for further guidance and support. Subsequently, on 10th July 2020, the IFF sent  a notice to NIXI asking them to furnish reasons for what appeared to be an arbitrary act of internet censorship.

On the same day, it was learnt  that the websites of two other groups – There “Is No Earth B” and the India chapter of the global climate-action group “Fridays For Future”, too, had been taken down.

As it so happens, all three groups had been running an e-mailer campaign against the draft EIA (Environment Impact Notification) 2020 which had been opened for public consultation in March 2020 by the Ministry of Environment, Forest and Climate Change.

Notice dtd July 8 by Delhi police u/s 79 (1) of the Information Technology Act, 2000 and Sec 18 of the Unlawful Activities (Prevention) Act

The trouble with the draft EIA 2020

EIA,as a matter of public policy with regards to developmental projects and activities, was introduced in India in 1994. The EIA laid down rules, norms and regulations pertaining to the process of obtaining ‘environmental clearances.’ Public consultation processes and environment impact assessments were made mandatory for obtaining project clearances. The EIA  has,however, been amended several times over the past years with the result that it has become considerably diluted.

The 2020 draft proposed by the MoEFCC under Prakash Javadekar also seeks to do the same. The draft has already been severely criticised by senior environmentalists, human rights groups and citizens collectives.

The draft has been faulted for violating: I) Non-regression ( the idea that environmental law should not be modified to the detriment of environmental protection ); 2) Public trust and 3) Precautionary and polluter pays doctrines of environment conservation.

Of particular concern are the provisions that seek to allow clearances on an ‘ex post facto basis’ . A recent  Supreme Court judgement dated April 1, 2020 delivered  by the Hon’ble Justice Dr D Y Chandrachud in Alembic Pharmaceutical Ltd Vs Rohit Prajapati has held that: “The concept of an ex post facto EC is in derogation of the fundamental principles of environmental jurisprudence and is an anathema to the EIA notification dated 27 January 1994.

It is, as the judgment in Common Cause holds, detrimental to the environment and could lead to irreparable degradation. The reason why a retrospective EC or an ex post facto clearance is alien to environmental jurisprudence is that before the issuance of an EC, the statutory notification warrants a careful application of mind, besides a study into the likely consequences of a proposed activity on the environment. An EC can be issued only after various stages of the decision-making process have been completed.”

Some of the other provisions seek to exempt project proponents from acquiring prior environment clearance. Some of these industries are: Dredging and desilting of dams, reservoirs, weirs, barrages, river, and canals for the purpose of their maintenance, upkeep and disaster management; coal and non-coal mineral prospecting;  stand-alone projects for melting of ‘coal tar pitch’, among others.

The public-consultation process, which forms the bedrock of democratic participation when it comes to developmental politics, also has been diluted. The draft EIA Notification 2020 exempts a large number of projects from public consultation, including modernization of projects; expansion up to 50% of project’s capacity;  irrigation projects; secondary metallurgical industry (non-toxic metals); a range of chemical plants in industrial estates; biomedical waste, etc.

The dilutions are just a few among the many other problematic provisions that have been proposed under the new draft.

Campaign against it picks up

Once news about the new draft began circulating , many environmental  activists took to social media platforms to raise further awareness about the draft. The three websites that were blocked by NIXI had set up auto-generated responses on their websites to enable and encourage people to participate in the public consultation process by sending their suggestions and objections to the ministry.

“ Many citizens who are not as well versed with policy and environmental jargons prefer these types of auto generated mail responses (with user consent) because they do not have to draft letters themselves. They can read the pre-prepared response and if they agree with it, they can choose to send the email. Websites like Let India Breathe form a  bridge between policy-makers and citizens who wish to participate in democratic processes ,” says Yash Marwah, co-founder of Let India Breathe.

But when these platforms get taken down, a large part of the effort which has gone into awareness-building gets wasted. Getting people to participate in a country where a large percentage of the population has been rendered politically  inactive  is no small task. “Leading people to the site and getting them to engage with government policies requires years of awareness building-processes, which takes immense energy and we have been doing that for over two years now ,” adds Marwah.

Internet censorship is becoming a growing trend in India. Ever since the Arab Spring of 2010, , internet in general and social media platforms in particular are being used increasingly to raise awareness about political issues and as a way of mobilizing dissent. This is especially true in the present times, when COVID-19 has made it impossible to physically gather for protests. Online platforms are increasingly being used to express dissatisfaction with government policies and to carry out advocacy digitally.

In India , the Information Technology Act was passed in 2000 but it wasn’t until the terror attacks of 2008 that some seriously questionable provisions were added to the Act, such as Section 69B, which  empowers the police to snoop on one’s emails, phone calls, texts and other personal communication over the internet without any warrant from a magistrate.

In April 2011 , the Indian Government formulated rules to the Information Technology (Amendment) Act 2008. It made companies like Google, Facebook etc. and Internet Service Providers responsible for the content their users upload. “ISP providers and social media providers are classified as intermediaries by the law because they serve a vital function by providing the technical facility how end users post messages online. If greater amount of prosecution happens of ISPs themselves as well as social media companies, then to prevent these prosecutions and any legal risks, they over censor and even shut down content which is not illegal,” says Apar Gupta of the Internet Freedom Foundation.

This kind of censorship and internet shutdowns have become even more problematic under the Narendra Modi led NDA government. According to https://internetshutdowns.in/ , the number of internet shutdowns in India during the NDA government’s rule has been a whopping 400 times! The shutdown of mobile internet services in Kashmir since the abrogation of Article 370 is set to complete a whole year on August 5,2020 !

According to an article published by Quartz India, ( https://qz.com/india/1753116/modi-government-ramps-up-twitter-facebook-censorship/ )

Prime minister Narendra Modi’s administration ordered social media platforms to take down 3,433 URLs between January and October 2019 – a more than a five-fold rise since 2016.

The attitude of the government took a most alarming turn when one of the groups running the Withdraw EIA campaign, Fridays for Future, was charged by the Delhi Police with sections under the anti terror Law – UAPA (Unlawful Activities (Prevention) Act, 1967). The charge has now been dropped after widespread alarm and condemnation .

“ The initial notice which was issued under the IT Act referred to a specific provision under the conspiracy charge of the UAPA. There were no specific references to other legal provisions. This notice,as per media reports, has been withdrawn. However, given that this notice was issued, it presented a grave threat to digital advocacy, freedom and also online campaigning in which there was a high level of anxiety as well as stress which came towards several young campaigners who comprise this movement ,” adds Apar Gupta who has been legally representing the groups.

The way governments in India are misusing their powers to limit the democratising potential of the internet is truly unfortunate. While amendments related to censorship and privacy are worrying, the manner in which the UAPA has been used to clamp down on digital activism is particularly concerning.

It has been seen, time and again, that internet as a tool can just as easily be used to strengthen the dictatorial tendencies of ‘democratic’ governments: it can be deployed  to influence elections, surveil citizens and clamp down on free speech. But the internet has tremendous democratizing potential and  Indian citizens will have to stand up to the power excesses of politicians and bureaucrats  to defend this potential.

(Radhika Jhaveri is a Mumbai based environmental activist)