Virtually every day, important social media platforms like Facebook, Youtube and Twitter clamp down on news and views put out by independent news sites. These social media networks take refuge in ‘official’ communication, government orders or police directives and guidelines. Do these social media behemoths actually end up silencing voices of dissent? How valid are the concerns of the authorities that such news will adversely affect law and order? Will truth become a casualty in the name of curbing potentially inflammatory news?

On October 20, 2018, 80-year-old Zain-ul Ansari was returning home after visiting his daughter in Sitamarhi district in Bihar. He never made it. Ansari was attacked by a mob that was enraged at the police for refusing permission to take out a Durja puja procession through a Muslim locality. They prevailed upon him and set him on fire.

“News of the incident was suppressed by the police. Even the body was taken away from Sitamarhi to neighbouring Muzaffarpur district. We got the news and made a report. It went viral, especially the photos and videos on Youtube and Facebook. At first, the police denied the news and said it was impossible. Then, the SP confirmed it and told us to remove the video. They said it will cause a law and order problem”, said Shams Tabrez Qasmi, editor of MillatTimes, an Urdu-English news portal.

A letter from the cyber crimes cell attached to the Economic Offence Unit of Bihar police, dated Oct 31, refers to three FIRs lodged in Sitamarhi town and states that an ‘objectionable’ video uploaded by the website on its Facebook page has several objectionable words which could cause a law and order problem. Curiously, the letter does not rely on provisions of the amended Information Technology Act, 2000 but cites Sec 91 of the Criminal Procedure Code (the production of documents or material necessary for investigation of any case) to direct the removal of the video. 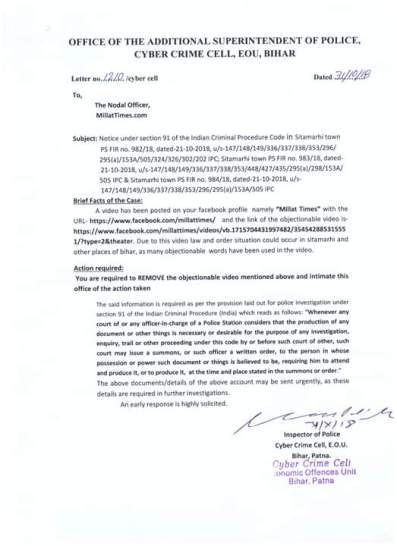 Letter from the Cyber Cell to Millat Times

Before Tabrez could seek legal advice on the letter, the videos were removed from both Youtube and Facebook. Both actions were unilateral. While Facebook did so on or around Nov 1, Youtube removed the video by Nov 4, citing a violation of community guidelines.

Tabrez is upset that the removal will impact the news of the death. Again, it is administrative failure that emerges as the glaring reason for the outbreak of violence. Police had dragged its feet over even lodging an FIR in the case, taking a week to do so.

In another video, Tabrez interviewed a local Sitamarhi leader, Shams Shahnawaz, on how both Hindu and Muslim communities lived in harmony but tensions arose over rumours of damage to a place of worship. The administration failed to move quickly enough to address it and contain the tension and the hapless octogenarian became a victim of the violence that broke out.