Who decides the distinction between pornography and art?

A warm fuzzy feeling surrounds the term ‘comic’ – Archie, Tintin, Batman, Tom and Jerry or Phantom comics coming to mind – colourful, easy on the eye and utterly kid friendly content. It wouldn’t occur to parents to monitor comics their children devour; notwithstanding the sexist, racist and often violent narratives in these comics. However, some parents in Bangalore were jolted out of their complacence after they attended the ComicCon India event held on November 17-18, and happened to flip through a copy of the comic Saga, when alerted by their children.

One of the aggrieved parents was lawyer Debjani Aich, who expressed her outrage about the “graphic sex and violent content” of the book on her Facebook page. The book, she said, was in the goodie bag her eight-year-old child got along with her ticket, the wrist band and a Batman poster. “The covers (front or back) of the comic do not carry any disclaimer about graphic content, age restrictions or parental supervision,” she alleged. She exhorted readers of her post to “help escalate this terrible, shocking and scary matter” as according to her it is “absolutely negligent and illegal to give children obscene, age inappropriate, pornographic reading material.” 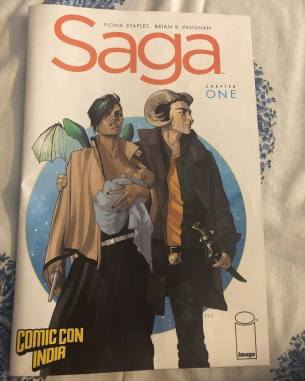 On November 22, Ms Aich proceeded to file an FIR in the Byappanahalli Police Station, but the matter was transferred to the Mahadevpura Police station which had the jurisdiction of the site where the alleged offence occurred – the KTPO Trade & Convention Centre, Whitefield.

According to police sources, the FIR was registered under Section 292 of the Indian Penal Code (IPC) and following investigations, sections under the Prevention of Children from Sexual Offences Act, 2012 (POCSO) could also be added. These could potentially be offenses under Section 11 and 12 of the POCSO Act (showing any object to a child in any form or media for pornographic purposes) and would shift to burden of proof on the accused to prove innocence. Mariswamy Y, chairperson of the Karnataka State Commission for Protection of Child Rights (NCPCR) has also said the Commission would look into the matter.

Meanwhile, Comic Con India in a statement apologised for what it termed an “inadvertent mix-up” and went on to clarify that “We, as an organisation, neither support nor promote such content for an underage audience.” Playing safe is understandable, given the case against them. But they need not have been on a back-foot. The media invite of ComicCon India nowhere bills the event as child-friendly. It flags discussions about “The increasing taste of pop culture in India”, “The team behind the geekiest event of the year”, “Mythology – the most appreciated topics in the millennial”. 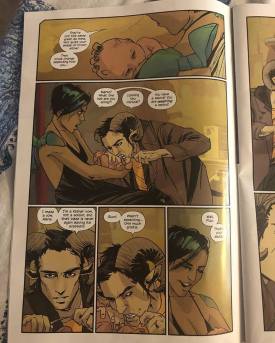 If parents and families flocked to a comic event assuming it was for children, should the organisers be blamed? The law is clear that it is the intention to promote “obscene” material that attracts penalties. However, the definition of “obscene” is nowhere specified.

Which then, is this comic book that has aroused such strong feelings? Saga, written by Brian K. Vaughan and illustrated by Fiona Staples is a space opera/fantasy comic book series, first published by the US-based Image Comics in March 2012. Inspired by Star Wars, with a touch of Game of Thrones, the hugely popular series has won many awards in the comic book industry, including several Eisner award, Harvey award Hugo Award in 2013 for the Best Graphic Story. Besides huge appreciation for its artwork and production, its content has been appreciated for its representation of diversity, its representation of ethnicity, gender and sexuality. Says Nadia Bauman in her review The Hidden Message of Saga, or, Why we Can’t But Help Love it, “Saga gives a promise of freedom to be whoever we want and make our own choices without fear of being judged or punished. “Diversity is beautiful!” every page screams.”

Indeed, one of the pages of Saga posted by Ms Aich on her Facebook page, depicts Marko, the main protagonist biting the umbilical cord of his newly born infant. When questioned by Alana, the new mother as to why he does not simply use his sword, he replies, “I made a vow, Alana, I’m a father now, not a soldier, and that blade is never again leaving its scabbard.” To many, this could come across as a strong pacifist, anti-war message for children.

The questions the ComiCon saga raises are: should pornographic material be banned and who decides what is or is not pornography? Can other checks be evolved to ensure that material freely distributed or sold is marked for appropriate ages (similar to ratings of films, toys or books)?

Perhaps the responsibilities of parents and other responsible adults in a child’s life could include age-appropriate discussions about sex and sexuality, art and aesthetics. Perhaps it could include being alert to newer trends in the genre of comics and graphic novels and engaging more deeply with such material in order to decide if it is appropriate for their children. More messy and more challenging maybe. But less dangerous than allowing the long-arm of the law to intrude on every aspect of public life and police what citizens must read.