Bail for journalist Priyanka Borpujari…but should she be charged at all for doing her work?

Journalist Priyanka Borpujari secured anticipatory bail in a case relating to charges under Sec 353 of the Indian Penal Code on Jan 30, 2019, illustrating yet again, the complete vulnerability of journalists who cover police-citizen conflict.

The case against her follows a pattern wherein police have been quick to file complaints and arresting journalists under sec 353 of the Indian Penal Code to prevent them or intimidate them from reporting conflict. In another case, Palghar police had arrested two journalists, Ram Parmar and Hussain Khan when they had gone to the police station to cover the arrest of alleged dacoits.

Priyanka Borpujari, after police forcibly picked her up and brought her to BKC police station

On December 26, 2017, Priyanka Borpujari was covering a slum demolition at Hans Bhugra Marg in Santa Cruz (East) in Mumbai and had been shooting videos on her phone camera of police and a civic demolition squad roughing up and even pulling at women who had babies in their arms. Police officers present took objection to her shooting the videos and tried to stop her. She protested and told them she was doing her work as a journalist.

When she continued, police picked her up, along with the protesting slum-dwellers and brought her to BKC police station. Her mobile phone was taken away from her and she was not told why she was being held. When she managed to get a message out, other journalists rushed to the spot and after several hours, she was freed, but not before a case was lodged against her and four women slum-dwellers, for obstructing police officers in their duty! 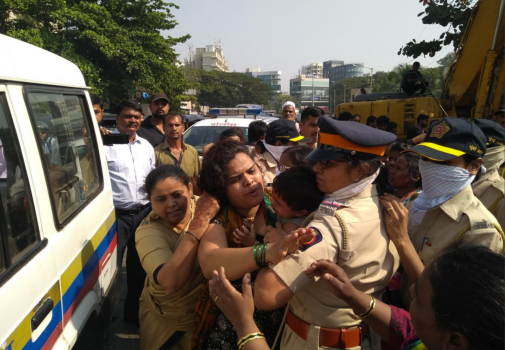 Police assault and pick up women with babies in their arms during a slum demolition  in Hans Bhugra Marg, Santa Cruz, Mumbai (Pic by Priyanka Borpujari)

As she recounted later:

As I continued to film this jaw-dropping scene, someone grabbed for my phone. “Get her phone!” I heard some men shout. “I told you to go behind and not step forward,” said a policewoman, as she tried to snatch the phone from my hand. I resisted, even as my arm was now stretched out. The phone fell; one of the women residents picked it up quickly and gave it to me. I stepped backward, but as the violence continued escalating — women were being pulled by their hair and were being dragged into the police vehicle — I turned on the phone camera again. This time, I was the center of attention of the police force: I kept shouting that I was just doing my job. “You do your work, I am doing mine,” I said, still not concerned what could happen to me next.

Now, more than a year later, a charge-sheet was filed in connection with the case on Jan 25, 2018. The four women slum-dwellers were arrested and produced before the court. They were subsequently granted bail after a couple of days.

On learning of the case and the charge-sheet filed against her, Priyanka moved an application for quashing of the case against her and in the interim, for anticipatory bail. Sessions court judge Milind V Kurtadikar, granted her bail on condition that she submit a personal bond and appear in court for the hearings.

Note: Free Speech Collective will be monitoring this case and will update progress in the case.