Journalists beaten up in Raipur by BJP workers

Suman Pandey, a journalsit with the digital portal Voices, was attacked by BJP workers  when he recorded a scuffle between BJP workers during a review meeting of the party in Raipur. The attackers also deleted footage from his phone,Another journalist, Vinod Dongre, was also injured in the fracas that followed. 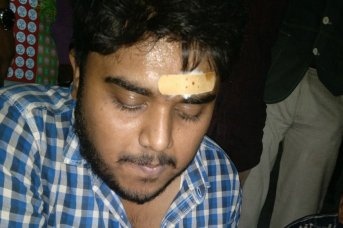 “My mobile was snatched and they deleted all the footage of scuffle between the party workers. They even thrashed me up brutally.”

According to this report, Pandey has lodged an FIR and said that he was attacked by the BJP Raipur president Rajiv Agarwal, Vijay Vyas and Dina Dongre.

In another report, Mamta Lanjewar, a TV journalist who was covering the incident, alleges that BJP members shoved and misbehaved with women journalists as well on Saturday. She says: “We will continue the protest. Not only journalists, but democracy is in danger. We are fighting against an attack on freedom of expression. Even a woman journalist was held by her hand and dragged out. If we are not safe at the BJP office between public representatives, then where are we safe?”