Line of No Control: Press Freedom in Kashmir

The media community in the Kashmir Valley has witnessed a year of intense turmoil. Barely a month after World Press Freedom Day on May 3, 2018, senior journalist Shujaat Bukhari was gunned down in the heart of capital Srinagar. Illegal detention, incarceration under a draconian anti-terror law, physical assault, lethal pellet guns and tear gas were in store for Kashmiri journalists. Newspapers experienced an economic stranglehold when government advertising was withheld, while journalists faced innumerable barriers to reporting: internet shutdowns and slowdowns, denial of access to public events and scenes of incidents, as well an overall increase in surveillance and control. Yet, they have battled on, upholding press freedom against severe odds.

The Killing of Shujaat Bhkhari

At about 7:00 pm on June 14, 2018, editor of the Rising Kashmir, Shujaat Bukhari, 50, left his office in Srinagar’s Press Enclave, a high-security area in capital Srinagar, on his way home to break his Ramzan fast. Three gunmen on a motorbike, faces partially masked, shot him at point-blank range. Two police personnel tasked with providing security after he had received death threats years before, were also shot. One died on the spot, the other in hospital.

Even as the cold-blooded assassination drew condemnation nationally and internationally, the police held militant group Lashkar-e-Toiba responsible for the murder, a charge denied by the outfit. A list of four suspects was released, including Sajad Gul based in Pakistan, Naveed Jatt, Azad Ahmed Malik, Muzafar Ahmad Bhat as the killers. Jatt and Malik were both killed in 2018, and Bhat is still at large. The case drags on, with even the charge-sheet not filed for months.

Photojournalists in Kashmir are particularly at risk of injury while reporting the frequent clashes between civilians and the security forces. On October 30, 2018, four photojournalists were injured by pellets after security forces fired at them while they were covering an anti-militancy operation in Shopian in south Kashmir. Waseem Andrabi of Hindustan Times, Nasir ul Haq of Rising Kashmir, Junaid Gulzar of Kashmir Essence and Mir Burhan of ANI were hit in the eyes and head. 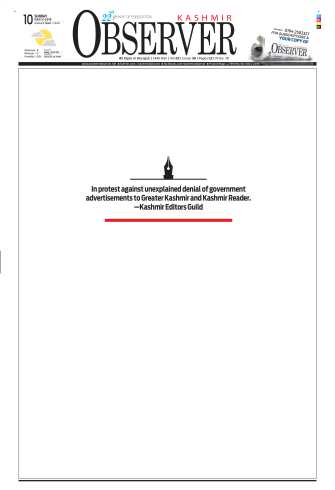 Withholding government advertising has long been a tactic to squeeze the media in a politically volatile zone where the corporate sector cannot thrive. Advertisements from the central Department of Audio-Visual Publicity (DAVP) had already been stopped since 2010 following the Amarnath Yatra row.  The state government’s Department of Information and Public Relations (DIPR) has also arbitrarily stopped ads to certain newspapers, for instance in 2016, during civilian unrest in the aftermath of the killing of militant Burhan Wani. Following the February 14, 2019 suicide blast in Pulwama which killed more than 40 troopers of the Central Reserve Police Force (CRPF), the screws were tightened. Government advertisements were stopped to three leading newspapers, Greater Kashmir, Kashmir Reader and Kashmir Uzma. In protest, major newspapers published blank front pages on March 10, 2019 to condemn the denial of advertisements.

Over 12 journalists beaten up in Fateh Kadal

Journalists often face physical assaults with no action taken on the perpetrators. On October 17, 2018, about twelve journalists were beaten up when they were covering a gunfight between security forces and militants in the city in the Fateh Kadal area of Srinagar. Policemen set upon the journalists who were doing their job, and attacked them in full view of senior officers. The incident was recorded on camera, but no action was taken against the accused.

On April 18, Kashmir Reader correspondent Junaid Nabi Bazaz was assaulted by a mob while he was reporting on the polling process at a polling booth in Mir Behri area of Srinagar. Bazaz, who witnessed the mob bullying and intimidating the polling staff on study, was accosted by the mob, accusing him of recording the election malpractice. Local police stationed at the booth looked on passively, and he was rescued by CRPF personnel. The Kashmir Journalists Association appealed to the Deputy Commissioner Srinagar and Chief Electoral Officer to take strict action against the persons involved in the attack on the reporter and also demanded action against policemen who acted as “mute spectators” to the mob attack.

Separatists also attempt to intimidate the media in the Valley. Threats – subtle and some blatant, are issued to pressurise the media outlets to carry their statements. Intimidating messages are also sent to reporters who refuse to reveal their sources, and they are threatened with being blacklisted. There is a complete lack of accountability and non-state actors continue to pressurize the media with impunity. To cite only one example, in May 2018, Zakir Rashid Bhat aka ‘Zakir Musa’, self-styled leader of Al-Qaeda affiliated Ansar Ghazwat-ul-Hind issued a threat to journalists who took photos of women who participated in funerals of militants. This threat gave a green signal to vigilantes and mobs to attack photojournalists.

The unlawful detention of assistant editor of Kashmir Narrator, Aasif Sultan, 30, was revealed when journalists associations questioned against his detention. Sultan was picked up from his home on the night of August 27, 2018. He was illegally detained in police lock-up until formally announced arrested on August 31. Sultan has been charged under the draconian Unlawful Activities (Prevention) Act, which has drawn much flak for curtailing freedom of expression, in addition to other fundamental rights. His arrest, for “harbouring militants” and giving support to a “proscribed” militant organisation, is thought to be linked to his cover story in July on the second anniversary of the killing of the young militant Burhan Wani. Repeatedly denied bail, he continues to languish in jail.

The knock on the door is more intimidating for journalists living and working away from Srinagar. On March 25, 2019, two policemen landed up at the residence of Khalid Gul, Greater Kashmir Bureau Chief in south Kashmir. Wearing civil dress, they carried with them a summons against him regarding his report about an attack on a local politician two days before . Gul, along with all other journalists, had reported the incident but he was hauled up and made to explain why he had termed it as a ‘militant’ attack. He said that the police forced him to record a statement. Other reporters say that officials do not receive their calls or give them official statements, thus impeding their filing stories.

In a placatory move, the state government later for a meeting with journalists’ associations and reassured them of access to report. However, no action was taken against the officers responsible for hindering the work of journalists.

Arbitrary bar on coverage and ‘no go’ zones for journalists

Formal bans aside, reporters are often arbitrarily restricted from covering newsworthy events, for example the October 11 funeral of Phd scholar turned militant Manan Wani in Kupwara. Sites of encounters, blasts and attacks often remain no-go zones, and journalists were also barred from going near the site of the suicide blast in Pulwama on February 4, 2019, which killed more than 40 CRPF personnel.

Journalists operate under a high degree of surveillance by the state, and those active on social media are particularly vulnerable to monitoring, abuse and intimidation. Senior journalist Gowhar Geelani, who has a high social media presence, said that police officer, who he did want to name for obvious reasons, abused and threatened him on social media: “he said would send the Indian Army to my house to teach me the difference between army and police”. “I have the screen grabs of his threats. I chose to respond to him with civility and requested him to come up prepared next time with a sound argument, not a threat,” he says. Another police officer tried to silence him when he was writing about a young schoolteacher who died in police custody on March 19, 2019. Yet, Geelani says, “Intimidation tactics don’t work. I have only one life, which they can snatch. Until I am alive, I will use my pen to reflect the ground reality of Kashmir’s political landscape along with the many shades of its competing narratives”.

Jammu and Kashmir has experienced the highest number of internet shutdowns in any Indian state, according to the Delhi-based Software Freedom Law Centre.

The longest shutdown recorded in India was in Jammu and Kashmir, spanning 133 long days from 8th July to 19th November 2016 in the aftermath of the killing of Burhan Wani.

According to the Stanford University study Blackouts and Bandhs: The Strategy and Structure of Disconnected Protest in India”, 134 network shutdowns or digital sieges took place in India and 2018 (as compared to more than a 100 such incidents in 2016-17). Significantly, as much as 47% of the total internet siege took place in Jammu and Kashmir.

Yet,  journalists strive for press freedom!

Despite the odds, however, the media in Kashmir is thriving, and journalists not only continue to inform the public about the complex realities of the situation, but also struggle for their rights, in a collective push for press freedom.