(Update: The Press Council came out with a statement today that it “stands for freedom of the press and does not approve of any sort of restriction on the media”. The case will come up before the Chief Justice of India tomorrow).

The Editors’ Guild of India has also issued a statement expressing grave concern that the Press Council of India, an institution created to safeguard press freedom,  was failing to speak up for it and perversely arguing for a media clampdown in the name of national interest) 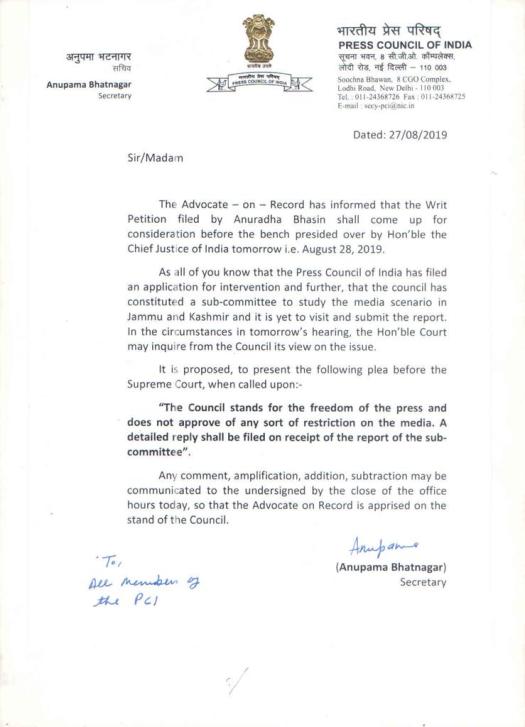 We, the undersigned individual journalists and media organisations, express our grave concern at the decision of the Press Council of India to intervene in the petition filed by Kashmir Times Executive Editor Anuradha Bhasin. The Press Council of India’s petition has sought to be heard in the matter and does not unequivocally seek to protect press freedom.

Instead, it  conflates the  issues raised by the Petition on the ‘rights of the media/journalists for free and fair reporting on the one hand and national interest of integrity and sovereignty on the other’ and seeks to assist the Court on the issue of the ‘freedom of the Press as well as in the national interest’.

The Press Council of India’s wording of the intervention petition in this manner is  deplorable, completely indefensible and strikes a severe blow against the struggle of journalists from Kashmir to be able to report freely on the effect of the abrogation of Art 370 on August 5, 2019. Since then, the entire region has been under the most extraordinary clampdown of communication, newspapers have not been printed or distributed freely and journalists have not been able to gather news, much less disseminate it. Their movements have been hampered and their mobility severely restricted.

The Internet shutdown has been total and only select government officers have had recourse to landlines or private satellite phones. Ordinary citizens have not been able to get any information about the plight of their family members, even of the death of loved ones! Medical help for citizens have been severely hampered and students are unable to get information on course and job applications.

The government continues to claim that Kashmir is peaceful and calm.Yet, independent media organisations have recorded evidence of protests and expressions of anger by citizens but in the face of the ban on the Internet, the very dissemination of this news is threatened.

There has been a global outcry against this absolute clampdown. Journalists’ organisations in India, have demanded that communication be restored. The Editors Guild of India has termed the lockdown in communication as ‘draconian for the vibrant local media that are the first eyes and ears on the ground.’

In this situation, it is the responsibility of an august, statutory body like the Press Council of India to step forward and fulfill its duty to media freedom. In 1966, the Press Council was set up as a statutory body under an act of Parliament with ‘the purpose of preserving the freedom of the Press and of maintaining and improving the standards of newspapers and news agencies in India’.  It is mandated with acting as a self-regulatory body set up as ‘a watchdog of the press, for the press and by the press’. It is expected to adjudicate on issues of ethics and on freedom of the press.

The current Chairperson of the Press Council of India, Justice C K Prasad, said in an address on the occasion of the Silver Jubilee Programme of the National Human Rights Commission of India held on September 5, 2018 at IIMC, Delhi, that the ‘media is the eyes and ears of any democratic society and its existence is vital to the smooth functioning of democracy. It guards the public interest and acts as voice of the voiceless’.

The present intervention by the Press Council of India is in sharp contrast to its report released  on 9 October, 2017 after its visit to J&K, where it states, “The committee is really concerned about the stoppage of internet and mobile services in the State. In this age, no media can work without these supports. The policy of curbs on internet and mobile services has to be reviewed urgently.” The Press Council had also recommended increase in DAVP and government advertisements to increase sustainability of newspapers, and stated, “Journalists, too, are doing public service during any coverage and, therefore, their accreditation or Press Cards should be duly honoured during curfew or restrictions.

By this intervention in the petition filed by Ms Bhasin, it appears that the Press Council of India is abrogating its Constitutional responsibility towards standing firmly and fearlessly for the freedom of the press and the right of the media to ‘act as the voice of the voiceless’. It flies in the face of the role of the Press Council of India as a statutory body to safeguard the rights of the media to fulfill its responsibility freely, without fear or favour.  That is in the true national interest, irrespective of the interests of the government of the day.

We urge the Press Council of India to immediately intervene in favour of the petition filed by Ms Bhasin to rescind the ban on communication forthwith. Anything short of this will be a travesty of media freedom.