Malegaon case: NIA wants in camera trial but shouldn’t justice be seen to be done?

The plea by the National Investigation Agency (NIA) for an in camera trial in the 2008 Malegaon blasts case is a blatant attempt to obscure the processes of justice.

This attempt to take the case out of the purview of public scrutiny will further jeopardise whatever is left of the case and thereby subvert the punishment of the guilty.

Prime amongst the accused in this case are Pragya Singh Thakur, now a BJP Member of Parliament from Bhopal, army officer Lt Col Prasad Purohit, retired major Ramesh Upadhyay, Sudhakar Dwivedi , known by his alias as Swami Dayanand Pandey and Sameer Kulkarni. Some of the accused are members of Abhinav Bharat, a Hindu extremist group formed in 2006 and linked to a number of terrorist acts.

The case is currently on in a special NIA court in Mumbai, headed by judge Vinod Padalkar. The NIA plea for an in camera trial will come up on Aug 29, 2019. 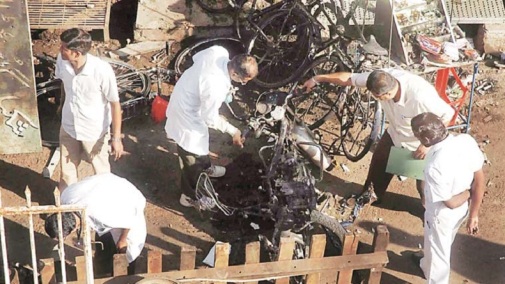 Forensic experts collecting evidence at the site of the blasts

The NIA application has been challenged by eleven journalists in Mumbai, who said that a bar on media coverage of the trial would amount to a breach of Article 19 (1) (a) that guarantees the right to freedom of speech and expression. Not a single witness had complained or spoken of any perceived threat or intimidation to warrant an in camera trail under sec 17 of the NIA Act, 2008, the journalists have said.

Responding to the journalists’ intervention, the NIA claimed that the journalists – all representatives of the media and covering the trial – had no locus standii to intervene in the case and interfere in the trial!

While Purohit and Thakur supported the NIA application for an in camera trial, co- accused Major Ramesh Upadhyay did not support it and an intervention application made on his behalf apprehends that an in camera trial may suffocate the truth and that the prosecution may ‘bully’ witnesses!

A separate intervention application made by Nisar Ahmed Sayyed Bilal, father of Sayyed Azhar, a bomb-blast victim, argued against the in camera trial, stating that the NIA application was ‘collusive and mala fide’ and that it went against ‘the spirit of democracy, open-court principle, transparency and accountability.’ Pointing out that both Sec 17(1) of NIA Act and Sec 44(1) of UA (P) Act, pertained to in camera trials for the protection of witnesses, the application said that 125 witnesses have already been examined and no such application had been brought on record.

Why keep the media out?

This isn’t the first time the issue of media coverage has come up in this important case. In 2016, Purohit sought an in camera trial and the NIA court granted that hearing upto the point of framing of charges be conducted in camera. Journalist Alok Deshpande made an application to remain present in court during the trial and Purohit made two further applications for a total ban on publishing of the proceedings of the case in print, electronic and social media. However, in 2017, all these applications were dismissed.

Purohit had also filed an application before the Bombay High Court seeking non-truncated copies of the witnesses’ statements that are part of the charge sheet. Purohit’s lawyer Shrikant Shivade claimed that it would not be possible to cross-examine those witnesses whose names are masked or undisclosed.

While hearing the matter last year, the Bombay High Court enquired whether the NIA had requested/applied for an in camera trial for the security and protection of witnesses since identity of key witnesses was truncated. The NIA plea follows from this observation and has produced a rationale for an in camera trial: that the trial is ‘sensitive’ as it deals with allegations that the accused ‘committed the offence to take revenge against the Muslim jihadi activities and to create a rift between the two communities.’

In its application, it sweeps up all the reasons why the trial should be hidden from public view – protect communal harmony and ensure witness security, throwing in national security and public order for good measure. The NIA said, further, that ‘unwarranted publicity needs to be avoided as it has potential to damage communal harmony and eventually jeopardises the fairness of the trial’.

However, the NIA claim about unwarranted publicity is untenable. Writing on the case in news website Scroll.in, journalists Smita Nair and Sruthisagar Yamunan (Special Report: How NIA went soft on Pragya Thakur – and is now delaying the Malegaon trial, July 12, 2019, have this to say:

“But the trial in the Malegaon case, which finally began in Mumbai in December 2018, has barely made it even to the inside pages of newspapers – barring on days when the courtroom witnessed drama, for instance, over how to record the bark of a sniffer dog.

As a result, it has gone entirely unnoticed that of the 124 witnesses that have appeared in the court so far, more than 90 witnesses have been called by prosecution lawyers merely to establish that the bomb blast actually took place.”

The Malegaon blasts on September 29, 2008, which left seven persons dead and at least a hundred injured, were the result of bombs planted in a motorcycle, the registration of which was in Thakur’s name. 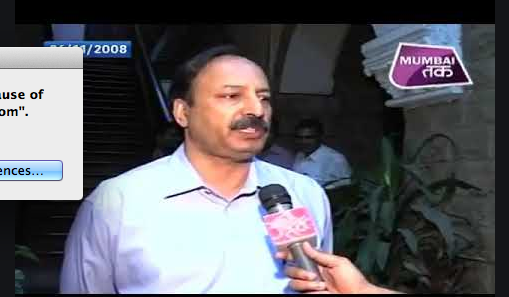 Hemant Karkare, the head of the Anti Terrorist Squad (ATS) Maharashtra, investigating the blast, traced the agency in Surat where the bike, an LML Freedom motorcycle, was registered. The bike was sold to Pragya Thakur, a self-styled ‘sadhvi’. Her interrogation yielded the names of the other accused. The ATS put together the details of the entire conspiracy, tracing the links between the series of blasts in the Samjautha Express, the Mecca Masjid in Hyderabad, and Ajmer Sharif in February, May and October 2007.

Thakur was arrested in October 24, 2008 while Purohit and others were arrested subsequently. On November 26, 2008, Karkare died in the Mumbai terror attacks but in an interview to a television channel just hours before his death, he said that the case against Thakur and others was based not just on strong evidence, but was corroborated thoroughly by other information and evidence. The probe, he then said, was on the right track.

The case was handed over to the NIA in 2011 and came under a huge cloud when former Special Prosecutor Rohini Salian levelled the charge that she was asked to “go soft” against the accused, a year after the Modi government came to power in 2014. Salian is no longer associated with the case.

In 2016, the NIA filed a supplementary chargesheet stating that it found no evidence against Thakur, Shyam Sahu, Lokesh Sharma, Dhan Singh Choudhury, Praveen Takalki and Shivnarayan Kalsangra and that they should be discharged from the case. As it is, in July 2009 itself, charges against Thakur under the Maharashtra Control of Organised Crime Act,1999 were dropped on the ground that she was not part of any organized crime syndicate.

The special NIA court however refused to discharge Thakur and all the accused were charged under sections 16 and 18 of the Unlawful Activities Prevention Act (conspiring to and committing/organising a terror act) and under the Indian Penal Code for criminal conspiracy, murder, attempt to murder and causing hurt besides charges under the Explosive Substances Act and Arms Act.

In April 2018, Thakur was granted bail by the Bombay High Court and the NIA did not oppose her bail application. Thakur sought bail on health grounds but contested, and won, the Lok Sabha Parliamentary seat from Bhopal, Madhya Pradesh in May 2019. Other controversies followed as she claimed, during her campaign, that the Maharashtra ATS chief Hemant Karkare died because she had ‘cursed’ him! She later sought permanent exemption from attending weekly hearings of the case but this was rejected by the special NIA Court.

Justice must be seen to be done

Lately, there are numerous attempts to keep the media out of cases that acquire a sensitive hue. The courts are sensitive to the privacy of victims and survivors in sexual violence cases and direct the media to adhere to the law in reporting these cases and that’s a good step against intrusive media coverage. But when does this become detrimental to the processes of justice?

As the saying goes, it is not enough for justice to be done it but also must be seen to be done. A trial and hearings in an open court are vital for the administration of justice. Last year, in the Sohrabbudin case relating to the gag order on the media, Justice Revati Mohite-Dere of the Bombay High Court said that the press is the most powerful watchdog of public interest in a democracy. The demands of a democratic society are that it must know what is happening in the country. In her order striking down the ban on the media, the judge said:

“The rights of the press are inherent with the constitutional right of freedom of expression. In reporting from an open trial, the press not only makes use of its own right, but serves the larger purpose of making such information available to general public.”

It is a vital role and responsibility. This must be protected.