By freespeechcollective on April 26, 2020 • ( 1 Comment )
Sajad Rasool, founder editor of community news platform ‘Kashmir Unheard’, writes about the experience of setting up a vibrant online site, only to come to a grinding halt due to the Internet shutdown with the abrogation of Art 370 on Aug 5, 2019.
Republished with permission from Countercurrents.org
Click here for original link 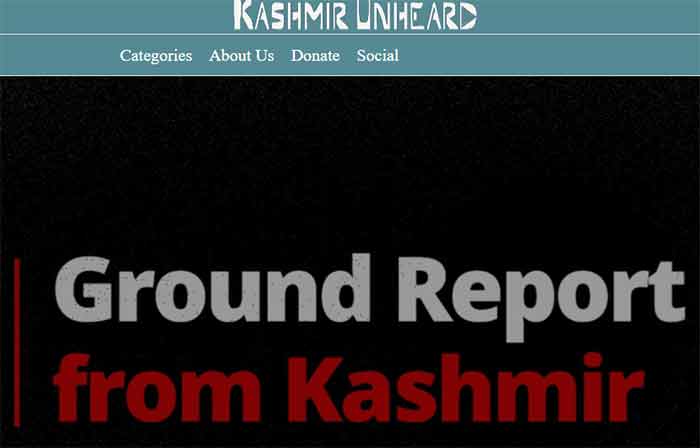 Kashmir’s story, ravaged from misreporting and state-sponsored journalism in the past more than three decades has been pushed to an extreme, with hardly any representation in media to the local populace to speak for themselves and question the narratives crafted in the studios, thousands of miles away. The traditional mass media usually tends to less inclusion of community voices, as the control, ownership, and authorship are in hands of a few only. Editors decide what is read and who is heard and who is not.

The free press is already struggling in Kashmir due to slow internet connectivity and further intimidation and harassment are adding to hamper the smooth functioning of media. Journalists have been targeted more frequently in the past 8 months. With this ongoing crisis, media too evolved, what didn’t change is the regular harassment, from summoning journalists to police stations and booking them under different draconian laws.

The advent of social media and digital means of communication revolutionized the way people in the world communicate and share information. It became part of 21st-century society, everything in the society is affected virtually by digital media. This invention and its spread changed the way we interact and communicate with fellow human beings. The storytelling in the media industry evolved and became easy for the people who otherwise would remain unheard of.

A few years back we were so much accustomed to traditional media studios and print media coverage, that only a handful of people, usually privileged ones will have the access to become journalists and tell stories, set agendas and prioritize the content and decide what people shall read in the morning or watch during the prime time TV shows. The previous decade changed just that, the internet and mobile phone technology revolutionized the very concept of storytelling. It flipped the profile of storytellers and media makers; we saw hundreds of online news outlets coming to the fore.Internet and social media had the potential to flip the coin, it allowed a wide range of people to produce news and tell stories.

In 2014, after the Kashmir floods, a few likeminded activists, media students and I started Kashmir’s first community news platform ‘Kashmir Unheard’. Instead of joining any other media outlet after our studies, we established a platform that would open doors for the communities to tell the stories which never became a headline or were buried under hundreds of narratives.

The media landscape lead by communities, with basic training of film making on their smartphones, we trained more than a dozen men and women from every district of Kashmir in a year. An alternative landscape like many across the globe with the potential to bring out real narratives from ‘media dark’ areas of the valley was all set.

We at Kashmir Unheard managed the gender balance and trained 10 women in storytelling. These community correspondents not only reported on the issues which they and their communities have been suffering from a long time but also with a deep understanding of issues involved local authorities for action.

In the past some years Kashmir saw an increase in more and more people joining media organizations and starting their initiatives – this filled the information vacuum and offered a possibility to do journalism and storytelling in different formats. Journalism can only be improved only when local journalists are allowed to improve and work freely.

In the past 5 years besides trying to explain what causes the conflict, we tried to give voice to all perspectives – including nongovernmental organizations and people from all parts of civil society. We reported on different efforts made to resolve the issues, looked closely at all sides. To make people from our communities and elsewhere aware of the real stories of Kashmir. The main aim was to report from all diverse communities of Kashmir, not just a few. As journalists shall report about the whole society, not it’s half.

I believe, if the world must understand a conflict, its people have to be empowered to speak, only then we will understand conflict better and resolve.

Crippling media: the impact of the Internet shutdown

August 5, 2019 – with the abrogation of article 370 everything changed for all Kashmiris politically, we witnessed thousands of arrests, internet, and communication lines were shut and media was paralyzed. Kashmir unheard and many other online news outlets were silenced the same day – with the main idea of giving voice to the muzzled voices of Kashmiri communities.

August 2019 brought a very difficult phase for journalism in Kashmir, hundreds of people lost their jobs after many online outlets had to shut down, journalists are being harassed regularly. While the media remains under threat in Kashmir and strategic attacks against them continue, the number of journalists is being made less.

As free journalism disappears from Kashmir, its stories are expected to remain buried. If a journalist who is living in conflict and experiencing it writes something that’s much more in-depth, we not only can see a greater chance of getting people to engage with the story but it increases the authenticity as well. In the times of this pandemic, we need more press freedom, the journalist’s movement if curbed will keep us unaware of the ground realities. Free flow of information in desperate times is a must, which is only possible when the people associated with this fraternity do not feel intimidated.

The Kashmir conflict has affected not only Kashmiris in particular but the people across south Asia as well. I believe conflicts do not end by themselves unless all parties are involved, ground reporting from Kashmir by Kashmiris is a must for all the parties to understand different perspectives but also learn what this community is looking forward to.

By putting real people in the story, all the parties can understand how this conflict affects them. We know that news reporting will still not only mean to resolve anything but who reports and what is reported has the potential to change how we all look at things.

The real stories are to be heard, and they neither can be told by the mainstream TV studios of India, with a jingoistic attitude and demonizing Kashmiris nor can they be told by the print journalists coming from outside of Kashmir. Instead, it is such platforms, alternative media platforms that can-do justice in real sense.

An indirect ban on online media by restricting the internet speed is a punishment to the whole society and is adding to the wounds of Kashmiris amid these crises, the muzzling of freedom of the press is a question mark on the face of democracy.