By freespeechcollective on July 25, 2020 • ( Leave a comment )
“The power to punish for contempt is not meant for giving protection to individual judges. On the contrary, it intends to inspire confidence “in the sanctity and efficacy of the judiciary, though they do not and should not flow from the power to punish for contempt”. Rather, such principles should lie on solid foundations of trust and  confidence of the people–a reassurance to them that the judiciary is fearless and impartial.”
– Law Commission of India report no 274, Review of the Contempt of Courts Act, 1971)
Three separate instances of contempt of court recorded in the last few weeks illustrate the precarious freedom available to citizens who dare to raise a voice about the judiciary. It also makes a mockery of the principles cited above.
Its quite immaterial whether those who question are senior advocates or desperate and emotionally disturbed survivors of gang rape, if their outbursts were in court or whether their comments were made on social media platforms or even whether they were forced to hold a press conference to draw attention to their grievances. But their crime – of allegedly lowering the dignity of the court – is the same.
The first two instances – that of the stripping of the senior advocate status for Yatin Oza by the Gujarat High Court and the suo moto notice to Adv Prashant Bhushan for his tweets are bad enough.
Twitter has withheld the Tweet after resisting the court’s demand:

But, of the three, the plight of those arrested in the gangrape case in Araria, Bihar, must count as the worst example of the misuse of the contempt law. 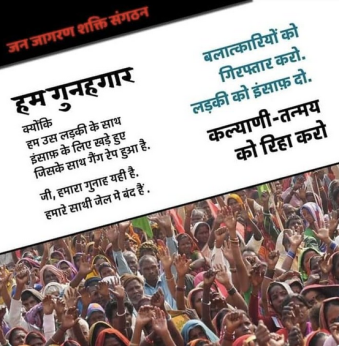 On July 15, 2020, a judicial magistrate in Araria, Bihar, took offence to a very simple request of a woman survivor of a gang-rape. The woman, who works as a cook and is non-literate, was allegedly raped by five persons on July 6 and filed a complaint before the Araria women police station the next day. As required by law ( Section 164 of CrPC) she appeared before the magistrate to record her statement. Accompanying her were two activists of the Jan Jagran Shakti Sanghatna (JJSS) which works on social justice issues in the area.
When the woman was asked to sign her statement, she reportedly sought that it be read out to her and that the two activists accompanying her, Kalyani and Tanmay, also get to read the statement. From all accounts, she was extremely agitated and demanded that it be read out. The judge took offence to her behaviour and decided that she was obstructing the process of justice! All three, the gangrape survivor and the two activists who merely accompanied her for moral suport, were thrown into jail!
The fact is, the woman was non-literate. The woman, again according to reports, was kept waiting in a room in which one of the accused was present, for more than an hour! Police (and the judicial officers) appear to have done nothing to ensure she was in any way protected.  Why was her mental and emotional fragility not addressed or even that her anxiety over a statement she could not read?
After a furore, the gangrape survivor was released on bail but, inexplicably, the two activists, who would have been part of a crucial support network for her, are still in jail. On what grounds? How and why have any of them committed contempt of court? How can a judicial magistrate throw them into jail on contempt?
No answers are forthcoming.
Given the manner in which the judiciary has reacted to any reference to it – as in the other two cases – and one does not expect any answer.
Yatin Oza case

As President of the Gujarat High Court Advocates’ Association (GHAA), Yatin Oza addressed a press conference on May 9, live streamed on Facebook. According to reports, Oza had alleged that the HC Registry favoured lawyers with ‘billionaire clients’ and alleged nepotism in getting matters circulated.

The Gujarat High Court took suo motu cognizance of Oza’s comments ‘raising his accusing fingers…against the High Court, High Court Administration and the Registry by irresponsible, sensational and intemperate delivery’ . By way of punishment, the full court, in a meeting on July 18, unanimously resolved to review and recall the full court decision of October 25, 1999, where Oza was designated as a senior advocate.

Oza had approached the Supreme Court against the criminal contempt notice issued to him, but the apex court refused to entertain the application, sending him back to the Gujarat High Court. In a hearing on June 16, the Chief Justice SA Bobde said ‘we are not actually inclined to hear it’, and allowed the withdrawal of his application.
Could the Supreme Court have taken a more sagacious view of the matter and tried to hear and understand the grievance of a senior advocate and an office-bearer of the advocates association?
Prashant Bhushan’s tweets

On July 22, a bench of Justices Arun Mishra, BR Gavai and Krishna Murari of the Supreme Court decided to take suo motu notice of  two tweets by Adv. Prashant Bhushan, which, in the court’s opinion, ‘have brought the administration of justice in disrepute and are capable of  undermining the dignity and authority of the Supreme Court in general and the office of the Chief Justice of India in particular, in the eyes of the public’. 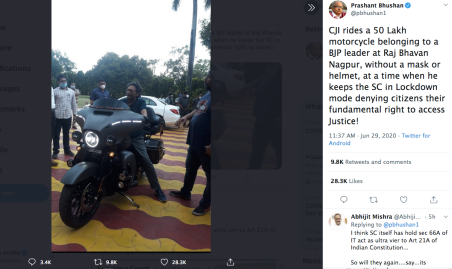 In another tweet on June 27, he wrote:
“When historians in future look back at the last 6 years to see how democracy has been destroyed in India even without a formal Emergency, they will particularly mark the role of the Supreme Court in this destruction, & more particularly the role of the last 4 CJIs”.
Clearly, these were red flags for an oversensitive judiciary. The judges asked Twitter why it could not take down the tweets on its own (Twitter has now complied). The case has now been posted to Aug 5.
Do we still need the ‘Scandalising the court’ provision?
Despite several efforts to review this archaic provision, it still remains on the statute books.
While UK scrapped the provision in 2013, following a recommendation of its law commission, Law Commission of India recommended that it be retained. In its report (No 274 of 2018), it went into the issue in great detail. On the one hand, it said :
The power to punish for contempt is a rare species of judicial power which by the very nature calls for its exercise with great care and caution. Such power ought to be exercised only where “silence is no longer an option.”
It said the Supreme Court made a distinction between a mere libel or defamation of a Judge and a contempt of court or ‘scandalising of a judge in relation his office’, and laid down a test of “whether the wrong is done to the judge personally or it is done to the public.”
On the other hand, the Law Commission of India turned down any suggestion to amend the law on Contempt. Unlike in the UK, where there were hardly any instances of contempt being applied after 1931, the Law Commission report states that cases of contempt – both civil and criminal – in India was substantial. Besides, in the UK, contempt provisions were dealth with in other laws like the Communications Act, 2003 or the Public Order Act, 1986. In India, the report said, ‘the ‘deletion of ‘criminal contempt’ from Act 1971 will leave a palpable legislative gap.’
The Law Commission felt that any change to the 1971 statute would ‘largely expose subordinate courts to increased instances of unaddressed ‘contempt of court’, particularly ‘scandalizing’, because of the narrowed scope of Section 10 i.e. the power of High Court to punish for ‘contempt’ of subordinate court”. This was with reference to suggestions that the ambit of ‘contempt’ be limited only to ‘wilful disobedience of directions/judgement of Court ’will effectively demote the expressions ‘contempt’ and ‘contempt of court’ as used in and referred to under the Act 1971.
Later in its report, it said this would be undesirable because of the ‘continuing need for deterrence against contemptuous elements’ and it would potentially reduce the respect for and fear of the courts and their authority. The report then concluded with a rejection of any amendment to Sec 2 of the Contempt of Courts Act, 1971.
The fact is, that whether it is legitimate criticism by members of the bar or the cry for justice as the hapless survivor of the gangrape in Araria, the law does not guarantee any protection.