Journalists write to C’garh CM : Demand action against attackers of Kamal Shukla and others

More than 14 days since the attack on journalist Kamal Shukla and other journalists in Chhattisgarh, no action has been taken against the perpetrators. Kamal Shukla, who went on a hunger strike in Kanker to protest the attack and the lack of action, was forcibly admitted to hospital […] 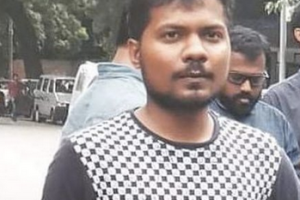 Clear that the arrest and detention of Kanojia is politically motivated and driven by vendetta. It fits a larger pattern of Uttar Pradesh administration attempting to silence dissenting voices.

By Malini Subramaniam Senior journalist from Chhattisgarh Kamal Shukla, Editor Bhumkal Samachar, who was brutally assaulted on Sept 26, 2020, told Free Speech Collective that these attacks were a direct consequence of exposes in his newsportal Bhumkal Samachar on illegal sand mining in Kanker district.  Shukla was attacked […]

Journalist Kamal Shukla was brutally attacked in Kanker, Chattisgarh today, by goons allegedly of the ruling Congress-I. He said the attack was prompted by those opposed to his reports on illegal sand-mining and other irregularities in the area. Shukla had rushed to the aid of another journalist Satish […]

In the midst of the debate on the controversial USC jihad programme of Sudarshan Television, well known academic and public intellectual, Prof. Jagdeep Chhokar, and RTI activist Venkatesh Nayak , have sought proceedings to wind up Sudarshan Television Channel company for acting against the integrity of India and […]

Justice A P Shah delivered a trenchant critique of the state of the judiciary. Speaking on the occasion of the Justice Hosbet Suresh Memorial Lecture, the former Chief Justice of Delhi High Court made no secret of his anguish at the abdication of the responsibilities of the apex […]

Academic freedom is about the right to study, teach and research a diversity of viewpoints. Yet, this right that is so crucial for the pursuit of knowledge has seen widespread attacks in colleges and universities across India. Excerpt from a status report by Nandini Sundar and Gowhar Fazili […]

The Double Siege: News Media in the Time of COVID-19 (an excerpt from the PUCL report).

People’s Union for Civil Liberties (PUCL) (Maharashtra) released its report ‘The Double Siege: News Media in the Time of COVID-19’ on September 4, 2020, based on a discussion with Sevanti Ninan, media commentator and founder editor of The Hoot and the author of the report, and journalist Geeta […]