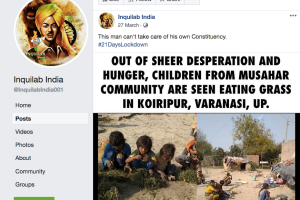 Despite pleas by doctors and students, the people of Kashmir are still denied full restoration of Internet. A Supreme Court order on a petition filed by the Fountation for Media Professionals and the Private Schools others, merely said that a high powered committee would look into the matter. […]

Media lockdown in the age of Covid-19

Journalists in India are being intimidated and harassed by governments trying to manage a pandemic by simply censoring uncomfortable reports. FSC brings you a list of ten instances of serious charges against journalists for their reports. World Press Freedom Day dawns over a globe fraught with the sorrow […]

Journalist Qazi Shibli : “… it was like they were constantly snatching books and pens from me ”

(Reprinted with permission from The Kashmirwalla)  Journalist Qazi Shibli spent nine months in Bareilly jail, after being picked up under PSA on July 27, 2019 for a story on troop movements in Kashmir preceding the revocation of Art 370 on Aug 5, 2019. He spoke to Yashraj Sharma […]

Sajad Rasool, founder editor of community news platform ‘Kashmir Unheard’, writes about the experience of setting up a vibrant online site, only to come to a grinding halt due to the Internet shutdown with the abrogation of Art 370 on Aug 5, 2019. Republished with permission from Countercurrents.org […]