CREATIVITY WRONGED: HOW WOMEN’S RIGHT TO ARTISTIC FREEDOM IS DENIED AND MARGINALISED

A FreeMuse report Alankrita Shrivastava’s film Lipstick Under My Burkha was initially denied release in India for being “lady oriented”, Icelandic artist Borghildur Indriðadóttir had her Facebook friends and photos deleted after she shared a promo of her photo exhibition Demoncrazy featuring topless women, and Afghan playwright and […] 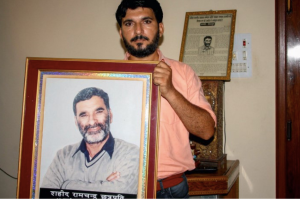 Update: Ram Chandra Chahhtrapati : 16 years of a struggle for justice

By Geeta Seshu On November 21, 2002, the courageous and indefatigable journalist RamChandra Chhattrapati died in a hospital in Delhi, 28 days after he was shot by two persons who were followers of Gurmeet Ram Rahim, the head of the Dera Sacha Sauda in Sirsa, Haryana. It has […]

Why has our media failed to recognise and remember the contribution of a courageous journalist like Ram Chandra Chhattrapati in taking on the might of the Dera Sacha Sauda and exposing its sinister practices? Journalist and writer Pushpraj, who has been following the case to secure justice for […]

An Open Letter to Mark Zuckerberg: The World’s Freedom of Expression is in Your Hands

The World’s Freedom of Expression is in Your Hands The Electronic Frontier Foundation (EFF) and more than 70 human and digital rights groups called on Mark Zuckerberg today to add real transparency and accountability to Facebook’s content removal process. Specifically, the groups demand that Facebook clearly explain how […]

Virtually every day, important social media platforms like Facebook, Youtube and Twitter clamp down on news and views put out by independent news sites. These social media networks take refuge in ‘official’ communication, government orders or police directives and guidelines. Do these social media behemoths actually end up […] 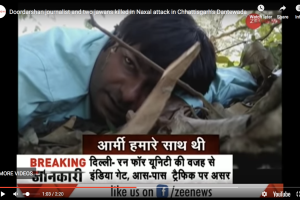 Journalists covering conflict: How to stay safe and live to tell the story!

Forget India Today anchor Rahul Kanwal’s ridiculous GI Joe shenanigans aired on the eve of the elections in Chhattisgarh today, how do ‘real’ journalists stay safe and still get the story when they are cover conflict in Bastar? Here’s a quick primer put together by Malini Subramaniam. The […] 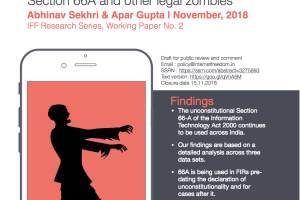 66A and other legal zombies: Why 66A continues to be in use

Section 66A and other legal zombies IFF Research Series, Working Paper No. 2, November 2018 Despite the striking down of Sec 66A by the Supreme Court of India in March 2015, it continues to be in use by police across the country.  In this important report, Abhinav Sekhri […]